Are you using apostrophes and capital letters in the correct way?

Sometimes mistakes happen because people ARE trying to use grammar and punctuation, but then they use it incorrectly. There are many ways this can happen, but I’m going to focus on just two of them. And there is a common theme in both: randomness.

Have a look at the following, and see if you can figure out what’s wrong. 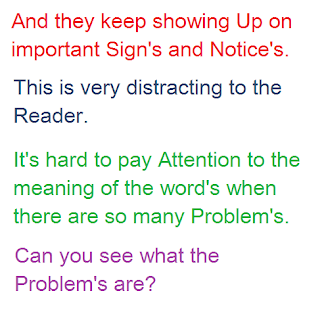 As evident, apostrophes and capital letters are being misused quite frequently. They keep popping up randomly in places they don’t belong. So let’s clear that up.

I’ll start with apostrophes.
It seems to me that if you’re using them wrong, you may have forgotten what they’re there for.
An apostrophe is used either for possession, or to indicate where letters or numbers have been omitted. An “s” often just indicates something is plural. It doesn’t always necessitate an apostrophe.

If you do a quick Google search of bad apostrophe use, you’ll find an abundance of examples! It’s kind of fun and good practise to look through them and remind yourself what NOT to do. Just because something is plural, that doesn't mean an apostrophe is needed.

I found an example where someone had written “Ladie’s room”. Perhaps the biggest mistake is that the writer has decided ladie is a word. It’s not. By placing the apostrophe where they have, it indicates the room belongs to a lady (just one lady), except ladie is not how you spell lady. If the room belongs to one lady, it should be “lady’s room”. But that’s probably not what it is, let’s be honest. It’s meant to be “ladies’ room”. You put an apostrophe AFTER the “s” in “ladies” to show possession (not before it), as it is the room belonging to the ladies.
But I also think, in the case of the bathroom type of ladies’ room, it can be written without the apostrophe because it is just labelling the room. I personally believe it can go either way, but it depends on how you interpret it. At the end of the day, ladies’ rooms are usually just titled “Ladies”, which makes things less complicated.

Also, you don’t need an apostrophe for CDs or DVDs if you’re just talking about your vast collection. But you will need one if you’re saying “The CD’s case is missing”.
But never forget the exception: it’s/its. It takes an apostrophe when it is a contraction (it is), but requires NO apostrophe when it indicates possession (the dog lost its bone). Confusing, I know. But once you’re aware that “it” is an exception, it shouldn’t be too hard to forget.


Now, onto capital letters.
Capital letters are used at the beginning of sentences and with the first letter of a proper noun. Also, you usually capitalise abbreviations (NASA, NGO, QLD, etc.).

Needless to say, there are plenty of examples if you search online for bad capital use too.
I found one where someone had randomly capitalised “disturbing”, which made me think it was a reference to the band Disturbed, or the movie Disturbia. But it wasn’t, so there is just no place for a capital letter there. At all.
When I’m out and about, I see signs outside shops that look a lot like the following:
“Big Sale on Shirts and Skirts” or “Mind your Step” or “Please take a Basket” or “Caution: this Surface is Hot”.

In the above examples, every capital letter should be removed EXCEPT FOR the ones at the beginning of each sentence.
Remember, capital letters should be used for names of things, at the beginning of a sentence, or when writing acronyms, etc. If you aren’t doing any of that, let it be lowercase.
I capitalise Sydney Harbour Bridge because that is the name of the bridge in that particular harbour, but note that I did not capitalise the generic use of “bridge” or “harbour” in this sentence because they were not used as a name.

Not only are the mistakes happening too often, but there are people like me who keep noticing them. I’d like to think everyone would strive for correct grammar regardless of the work they do, but the reality is that it’s not really their priority to focus on it when they have another job to focus on. That’s why editors exist, I guess.
So, if anything, the frequency of these distracting errors in public notices and posters should indicate the necessity of proofreaders and editors in all kinds of workplaces. When you think about it, notices like these often contain an important message – sometimes a warning! – so wouldn’t it be potentially dangerous if the wrong grammar, spelling or punctuation was misleading or distracting to the intended audience? What if they miss the message altogether?
It’s not always capitals and apostrophes that are wrong. Sometimes the wrong word is used too. So I would encourage everyone who intends to write something to learn the rules, double-check everything, and brush up on things with a dictionary. If you’re writing something – anything – you have a responsibility to communicate effectively and accurately. But if you don’t care for learning or simply don’t have the time, it might be a good idea to consult someone who can help.


If you're looking for editing or proofreading services, be sure to visit my website to check out the services and rates I offer. Thank you for reading!www.thewritething.com.au